We got up pretty early, even thou we were up past 1AM.  Slept real good, no blue ghost lady to worry about at this place.  Dayton did take one of the ghost detection’s EMf meters and checked for any  “HOT” spots before we went to bed this morning.  Went over and had a nice continental (Waffle) breakfast.  Saw an older gentleman Smith Cutter talking to another man Bob Marlin.  He was showing him what looked like a motorcycle operations manual.  I thought maybe they were having problems with their Harley or something so I offered my help.  Turns out his manual wasn’t anything related to motorcycles or cars, it was all about hiking the Appalachian Trail.  Smith was in the midst of a journey which he started a month back, a hundred miles south of here in Georgia.  His final destination is Maine, hopefully before mid October.  His book reads like an owners manual, giving points of interest, were to camp and eat and most importantly were all the free WiFi hot spots are…, no kidding, the levels of daily trail terrain in graphics.  I guess the average Joe can do this in 6 or less months, as long as you do an average of 13 miles a day.  It’s harder at the start because you’re in the rugged mountainous areas, but as you go farther North the trail becomes less hilly and flattens out, so you can increase your distances each day.  That is until winter hits, hence start in the South in March/April and be done in the North by early October.  You can check out Mr. Cutter’s progress by visiting his trail blog at http://www.trailjournals.com/entry.cfm?trailname=18391 .  His trail handle, name is “Rock Steady”, and his wife updates his blog via snail-mail entries, so it’s usually a month or 2 back in time.  Lets all wish him luck in his bucket list, long quest.

Next it was off to rent a couple of motorcycles for the day; what I was about to find out was this was going to be the hardest thing to accomplish that day.  I had found a motorcycle rental place right down the road, but the owner who also co-owns a restaurant was at some state required food preparation seminar for the day; no motorcycle(s) on Thursday.  So we mVan it around, did a dozen or so G-Caches.  While Geocaching we kept finding another log entry for today, “Vilstudio”.  Later on that day at one of our “DNFs” (Did Not Find) GCaches, we met up with the “Vilstudio” team.  They were a couple that lived ~1.5 hours away in Dillsboro, NC., taking a long G-Vac weekend.  We saw them a last time, when we stumbled across a few AWESOME waterfalls along a G-Trail we hiked down.

Got back around 7Pm and had our first – and last meal at an old fashion looking franchise grill place called the Huddle House.  Was able to rent 2 motorcycles that evening, a Suzuki DL1000cc VStrom and a Boulevard C50T 805cc for Ann.  We parked them at the hotel so we’d be ready to get-up-and-go in the morning. 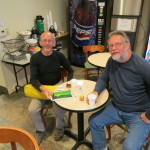 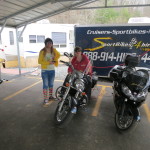 The place we rented the motorcycle that I wrecked on Hwy 165. 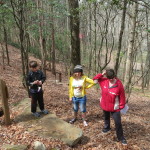 Now where is that Geocache? 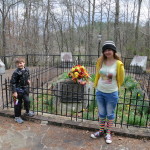 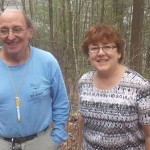 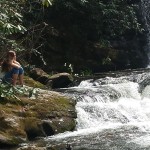 Emily sitting by a waterfall. 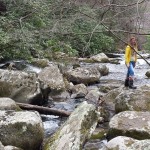 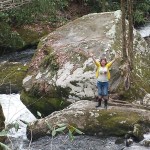 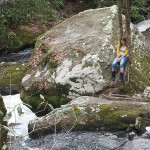 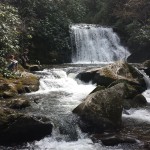 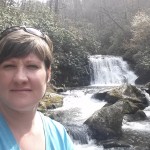 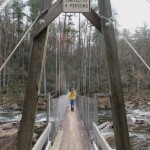 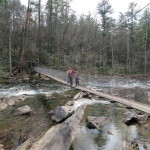 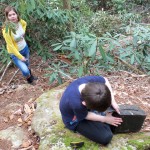 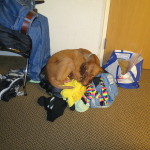 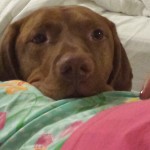 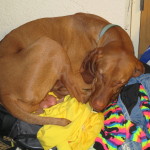